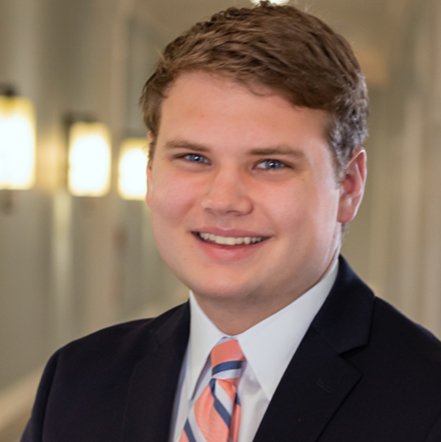 Evan Dawkins serves as a paralegal for the firm. He was born and raised in Lexington County and attended River Bluff High School where he served as an attorney on the mock trial team. This is where he met both Robin McLean and James McCutchen, who served as the attorney coaches for River Bluff. Evan attended The Citadel where he earned a bachelor of arts (B.A.) in Criminal Justice and a minor in Modern languages (Spanish). Evan has been admitted to The University of South Carolina School of Law where he will pursue a law degree beginning in August of 2021.  He plans to continue to work for McCutchen McLean, LLC while enrolled in law school.

James McCutchen helped me with my business contract for my new business venture. He was able to offer helpful and informative suggestions and recommendations for my contract. It is reassuring to have someone like James look over my contract to know that I will be covered. His service was outstanding and I highly recommend him for your legal needs!!

I recently had a tax issue with the IRS. I called McCutchen McClean law firm and they were able to fit me in quickly. They sat down with me, reviewed all the documents, listened to my concerns, and gave me wonderful advice as to how to fix the issue. They were friendly and understanding. Now, my tax issue is resolved, taking a HUGE weight off my mind. I would recommend them for any tax issue you may have! The service, hospitality, knowledge, and professionalism was outstanding!

We recently used James McCutchen and we could not be any happier! He was very kind, thorough when answering all of our questions and the best part of all we got everything completed pretty quickly. We highly recommend James. Thanks again for everything!

I have referred several clients to them. My clients are very happy with the outstanding, timely service they receive. James and Robin are extremely smart and professional, yet speak in "plain english" so everyone walks away educated regarding their tax, estate or family law issue.

Smart people that do great work.

I used Robin McLean as an attorney to secure a divorce about 20 months ago. I found her to be efficient, reasonably priced, and very well skilled. I was completely happy with her work. She did what she said. Since that time, I needed additional help with paperwork and she responded promptly and to my complete satisfaction. I highly recommend Robin as an attorney.

! NOTICE ! No Legal Advice Intended. This website includes general information about legal issues and developments in the law. Such materials are for informational purposes only and may not reflect the most current legal developments. These informational materials are not intended, and must not be taken, as legal advice on any particular set of facts or circumstances. You need to contact a lawyer licensed in your jurisdiction for advice on specific legal issues problems.